Honour Prizes by the Ambassador of Japan.

High Prizes: Winners for each category.

Certificate of Participation for all participants.

The Grand Prize will be awarded to a contestant who have not previously won it. The air ticket may have some restrictions of use during certain periods. 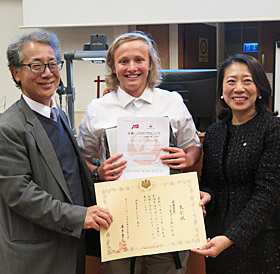 It was by pure chance that I participated in the competition this year. A friend of mine mentioned it to me last year but I wasn't able to participate then, and then I completely forgot about it until roughly two weeks before the competition date. I had to finish my speech in a bit of a rush as I was hesitant about even going, but I managed to finish it and practice enough just in time.

I had no idea what to expect from the competition. I only participated in order to measure my own language ability, as I am self-studying and didn't feel like I had any way of comparing myself to others. I was really nervous during the day, especially since I realized that basically everyone was there with their classmates, teachers and/or family and friends, and I had no one. I remember only speaking on five occasions before the award ceremony, giving my speech included. I almost regretted coming because I felt a bit bad about being alone and because I thought that I had messed up whilst giving my speech.

The win was definitely a surprise, or rather a shock. I thought I might get a smaller prize, but when I got announced as the Grand Prize winner I couldn't believe it. I had become content in seeing it as a learning experience and getting a better grasp of my level, so winning was so completely unexpected that I was at a loss for words.

I have never been to Japan before and so this will be my first time going. I have wanted to go for a while and have planned on doing so but this ticket gave me the opportunity to really make my dream a reality. I'm going to Japan for three weeks in December as that's when it worked best with my schedule and I really look forward to it!