Honour Prizes by the Ambassador of Japan.

High Prizes: Winners for each category.

Certificate of Participation for all participants.

The Grand Prize will be awarded to a contestant who have not previously won it. The air ticket may have some restrictions of use during certain periods.

The application deadline was 25 January 2019. To attend as audience, please see the information above. 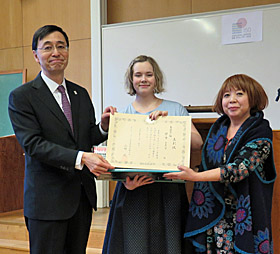 This was the second year I participated in the Speech contest. For me, not only has this contest provided the perfect opportunity to test out the Japanese that I have studied over the years, it encouraged me to push the boundaries of my knowledge of both the Japanese language and delivering speeches. As a high school student, I have yet to write a lot of formal texts in Japanese, so while writing my speech I worked with using the appropriate formal words, as well as expressions that help set the tone. Participating in the Speech contest gives you the chance to be wonderfully nerdy about language usage.

As rewarding it was to perform my own speech, as inspiring was it to hear the other participants' speeches. The speech themes always enables you to present a topic close to your heart. I have always been taught that in order to deliver a successful speech, only two things are necessary: genuine interest in the topic, and the enthusiasm for conveying it to others. Both years I have participated in the contest, I have left Stockholm feeling immensely motivated to learn more about the Japanese language and culture.

With the round-trip ticket to Japan I won, I was able to spend a month in Japan during the summer vacation, where I studied more Japanese as well as reunited with my families and friends from my exchange year. Japan will always be my second home, and as soon as I come back from a trip there, I am planning my next one. I know that in the future I will continue learning about Japan, and I look forward to hopefully participate in securing and improving the diplomatic relations, so that they may last another 150 years.